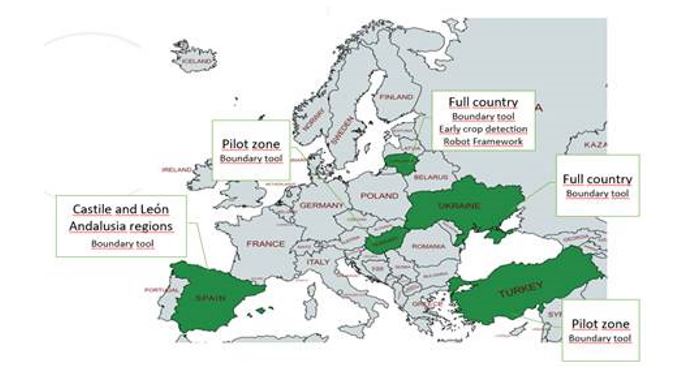 What is the UC about?

Farmers use GSAA, which allows them to submit parcels’ boundaries, to specify crop types on the respective parcels and to provide additional information to Paying Agencies.

The objectives of the Use Case are:

A tool-algorithm prototype for automatic delineation:

Prototype based on Sentinel 2 is not accurate enough to generate prefilled parcel boundaries data in GSAA, but its results could be used as an additional data to check parcel homogeneity and prevent farmers from major mistakes. To reach better results, the tool was used on Sentinel-2 1m super resolution image.  In a pilot zone 3 % more boundaries were identified based on super-resolution data, and the percentage of correctly detected boundaries increased dramatically from 15 % (only Sentinel 2) to 75% based on super-resolution.

During early stage classification 6 crop classes were generated by using Sen4CAP crop type algorithm based on 2019 GSAA parcels and Sentinel S2 images of March-April. Results can prevent mistakes in GSAA where permanent grasslands are declared as arable land, winter crops or winter rapeseed – as summer crops.

By using tool in NPA 50 records were processed in90 seconds, while manually it would take about 20 – 120 seconds for one record only. Such automation of data harvesting was done 36 times faster and was less prone to errors. Robotic process automation tool can help prevent mistakes in GSAA and significantly reduce time, necessary for farmer to fill the GSAA

Starting from 2023 in Lithuania it is planned to:

In parallel it is planned to start using Sentinel-2 1m super resolution March-April and September-October period images on the whole territory of Lithuania  (from www.digifarm.io):​

All new data-products will also be provided and visible in geotag app “NMA agro“ as to share new layers with farmers.

More information on the NIVA UC2 can be found on the NIVA website: https://www.niva4cap.eu/use-cases/ and the source code is available on GitLab: https://gitlab.com/nivaeu